07-26-2010, 12:09 AM (This post was last modified: 05-09-2015, 05:43 AM by SunilNagpal.)
Bacteria are the unicellular organisms and cannot be seen with naked eye. There is no particular method of cell division, they simply divide by binary fission in which cell divides into two daughter cells. They do not have proper nucleus within the cell but the genetic material is attached to the cell membrane in an irregular form. They are found everywhere like top of the mountains, rivers, on land and in ice. Bacteria have the property of living in extreme weathers like extreme cold and extreme heat. They are able to live long because they become inactive for a long period of time.

Bacteria play an important role in the environment:


Ever imagined the fate of nature with dead matter of animals/plants lying around? Bacteria play a very crucial role of silently getting the nature rid of the dead matter through the decomposition of dead organic matter by the micobes. Bacteria use them as a source of nutrients, and in turn help in recycling the organic compounds trapped in the dead matter. Through this process, other organisms also get benefited, who can use the simpler forms of organic compounds/nutrients released from the dead matter by various bacteria.

Quote:Organic carbon present in the environment in the form of dead organisms might eat up all the carbon dioxide from the atmosphere if there were no decomposers present on earth. One can imagine the situation if there were no carbon dioxide in the atmosphere. There would have been no photosynthesis in the plants and as a result no food would have been produced by plants. Decomposers or bacteria help in cycling of minerals like carbon and sulfur.


Nitrogen Fixation for availability to Plants

Nitrogen is the most important element for plants. Plants totally rely on nitrogen for their health and growth, and they cannot inhale it directly from the environment. They are dependent upon soil for the supply of nitrogen.
Through the process of nitrogen fixation, nitrogen from the atmosphere becomes available to the plants. This process takes place with the help of nitrogen fixing bacteria like Rhizobium and Cyanobacteria. These species of bacteria convert the atmospheric nitrogen into nitrates and nitrites as a part of their metabolism, and make it available to the plants. Some plants (leguminous plants) have modified themselves so well that they have a mutualistic association with the bacteria living into their tissues.


Bioremediation by bacteria
Bioremediation refers to the process of depletion/degradation of toxic compounds present in the natural environment by living organisms. Bacteria are one of the key players in Bioremediation. For example, oil spills due to oil digging operations or accidents on oil transport channels in the ocean or on the soil, is highly determinant to the healthy environment. Bacteria like Pseudomonas have been well known for the degradation of oil spills on oceans/soils.

Similarly, Contamination of heavy metals in the environment is a major global concern because of their toxicity and

Waste Water Treatment
Owing to their characteristics of degrading harmful chemicals and pollutants, bacteria naturally (as well as deliberately used by industries), help in treatment of waste water. 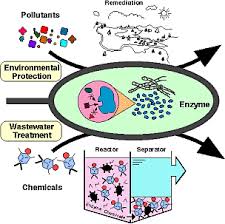 its a decomposer but that probaly doesnt help

(02-18-2012, 01:04 AM)luisdaniel8339 Wrote: Bacteria plus other microbes plays an important character in environment that typically is of DE- COMPOSERS which acts with regard to the previous stage of food chain.

MILK PROBABLY THE BEST ONE FOR POTASSIUM, AND EVEN GOOD TO BE USED IN MEDIA

Bacteria, and other micro-organisms are essentially important in the cycling of nutrients and energy, particularly in the breakdown of dead organic matter to make the resources locked up in things like dead trees available again to other living organisms.

They also play a central role and the fixation of atmospheric Nitrogen into organic molecules and in the cycling of minerals such as Carbon and Sulfer. Bacteria also make, or help to make, drugs, hormones, or antibodies